The Power of Shared Intent

Travel, for me, is like breathing—it’s a necessity. I thrive from the change in context and the chance to broaden my perspective. It renews me in a way that nothing else seems to.

It isn’t surprising, then, that my husband and I decided on a whim to escape to Ireland while our kids were happily entrenched at summer camp.

The entire trip was phenomenal. The scenery, the people, the food — it was a feast for the senses. It’s difficult to pinpoint what I enjoyed the most. That said, two of our experiences — The Hawk Walk and Musical Pub Tour — struck me as particularly relevant to my career, so I thought I’d share them, and the conclusions I drew about the two, with you:

Before this adventure, I had never heard of a “hawk walk”, so I wasn’t entirely certain what to expect when we arrived at

Ireland’s School of Falconry at Ashford Castle in Cong, County Mayo (western Ireland). It was an experience I won’t soon forget!

The falconry is home to several falcons, including Jabba and Chewie, two young (and deceptively light!) hawks born on May 4, 2017 (get it?!). With supervision from highly-experienced trainers, we served as perches for these two Jedi apprentices. We launched them by simultaneously extending our arms and stepping forward. We called them back in similar fashion, only this time with a bit of chicken or mouse hidden in our glove. 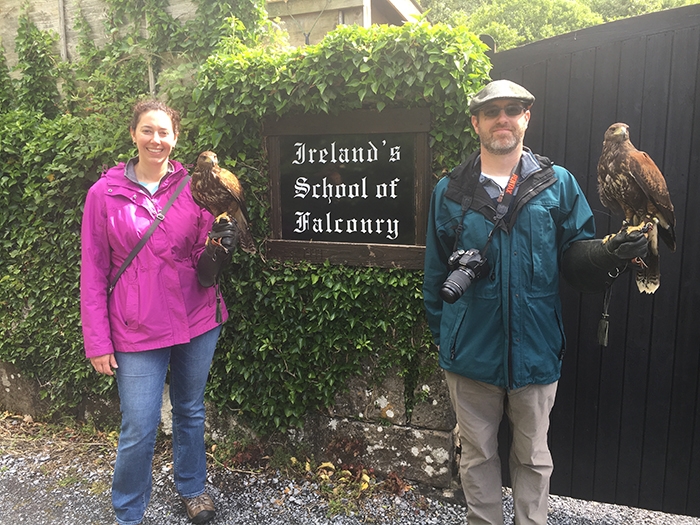 As part of the experience, we learned that Jabba and Chewie are Harris hawks, and as such, are social raptors. For this species, social means they are accepting of humans, and—more importantly—they not only live in groups, but also work in female-led teams to hunt. These hunting parties differ from other raptors who hunt alone in that the female ultimately makes the kill after her male team members chase the prey toward her.

Now, our musical pub tour was an entirely different beast, but an equally amazing experience. And, it’s exactly what it sounds like. Led by two supremely talented musicians, Damien and Eugene, we went from pub to pub, enjoying the food, the atmosphere and traditional Irish music played by our musical tour guides. 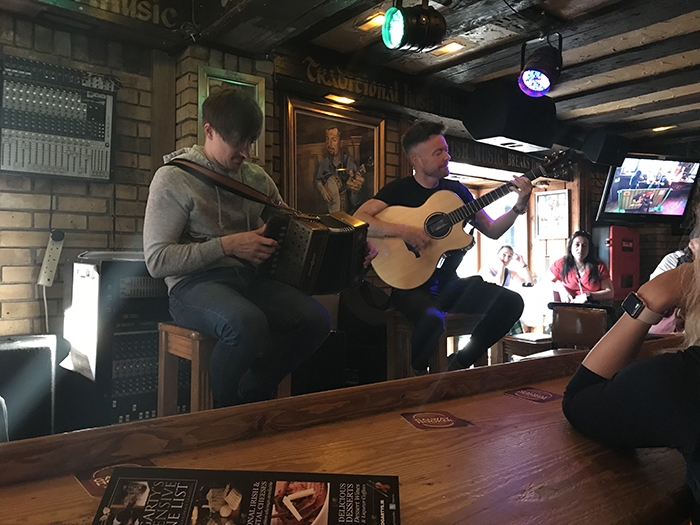 During our tour, we learned that one of our two guides, Damien Mullane, is considered one of the best button accordion players in Dublin and regularly plays with Sting. (For those that don’t know, the button accordion is an especially difficult instrument to play because it is diatonic, meaning the keys play one note when the bellows are pushed in, and different note when pulled out. Talk about coordination!) We also learned that our other guide, Eugene, is an equally talented vocalist and guitar player who specializes in traditional, lyrical Irish songs.

The duo (whom had never played together before this night) created music so in harmony you would think they’d play together for years. Their ability to dynamically adjust, communicate, and play outstanding music was beyond impressive.

Have you guessed what the hawks and the musicians have in common yet? Teamwork, of course. They each know their roles—and play them well. More importantly, the outcome each seeks is abundantly clear. As partners, they are on the same page—even with the unknown or a lack of shared personal history.

It doesn’t seem all that remarkable, right? Yet, this level of clarity is almost impossible to create and sustain in organizations. Indeed, lack of tangible clarity about the desired outcome is the second biggest derailer of transformational change.[1]

How many times have you been mid-project and some meeting or conversation reveals a serious disconnect between what you and some other stakeholder thought you were working to achieve?

Or how often have you found that the high-level picture seems clear, but once you’re off and running, you find there are numerous options and decision-points that could lead to vastly different outcomes?

This idea of intent — or a sufficiently clear shared picture of the future — is critical to the success of any endeavor whether you’re a hawk hunting, a musician jamming, or a business leader working on any number of initiatives.

Currently, I’m working with two companies—One a new CEO and their management team; the other a business in the midst of being acquired. Both companies requested I help support them through their respective leadership changes. As I learned more about the inner-workings of the organizations, I was struck that both suffer from the same issue: unclear intent.

Without a clear vision and a shared understanding of what success looks like, team members lack the cohesion to work toward a group goal. Without connection to the big picture, team members cannot deeply invest their energies. The work to collaboratively explore and decide what the future should be—with new leadership or a new owner—is the scaffolding that will support each organization’s successful transition.

How, then, do you know when you’ve adequately addressed intent? When everyone involved: (1) understands what the change means to them personally (not generically); (2) is committed to doing their part to make it happen; and (3) is aligned with everyone else. Understanding, commitment and alignment are the necessary, but intangible currencies of achieving anything meaningful through a group of people.

Like hawks collaborating for the hunt and musicians intuitively interweaving their talents, companies can be elevated to a level of functioning that seems effortless, effective, and beautiful. All it takes is intent.

[1] Lack of effective change leadership is the #1 derailer.

Sign Up for Updates!
JOIN OUR EMAIL LIST TO RECEIVE UPDATES DIRECTLY IN YOUR INBOX
*By completing this form you are signing up to receive our emails and can unsubscribe at any time.

Join Our List
Sign Up for Updates!
JOIN OUR EMAIL LIST TO RECEIVE UPDATES DIRECTLY IN YOUR INBOX
*By completing this form you are signing up to receive our emails and can unsubscribe at any time.